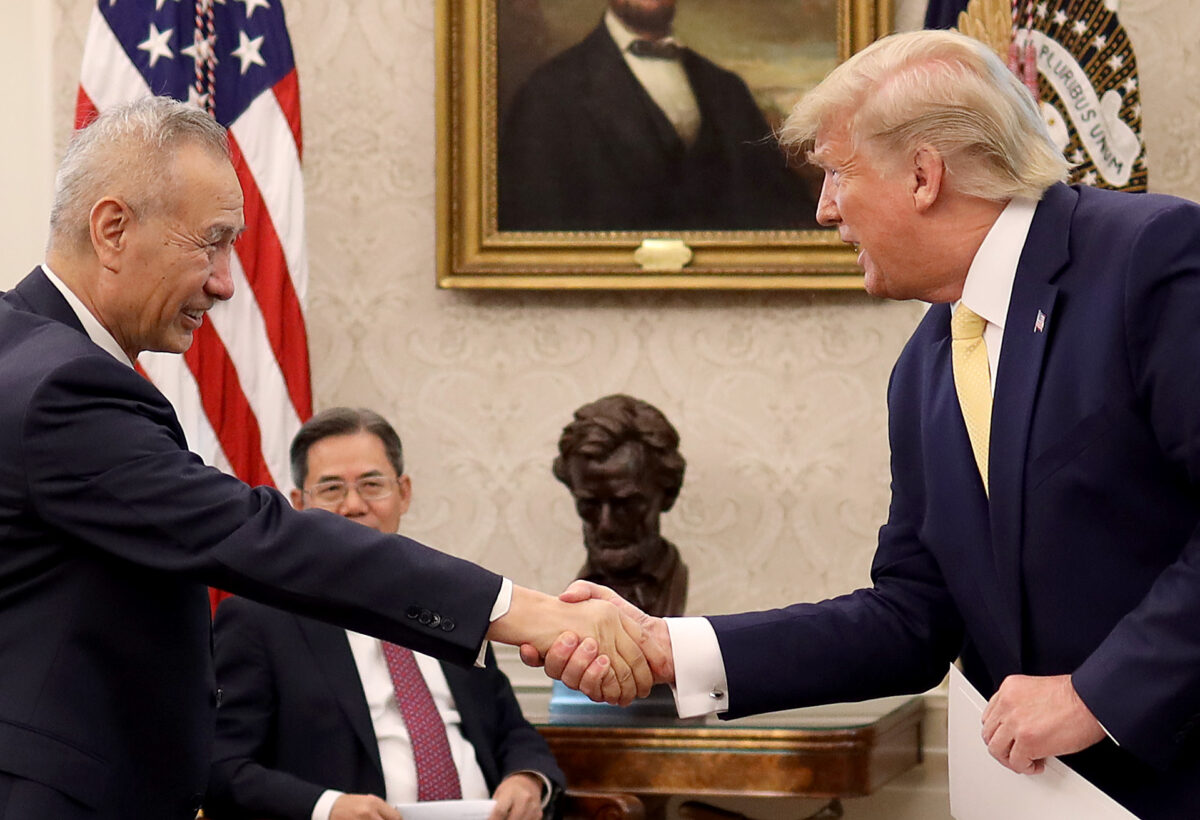 WASHINGTON—President Donald Trump on Oct. 11 praised the new partial agreement with China, saying “theres never been a deal of this magnitude for the American farmer.”

Beijing agreed to purchase “up to $40 billion to $50 billion” in agricultural products from the United States.

“Thats the largest order in the history of agriculture, by far, by two and a half times,” Trump said Oct. 11 at his meeting with Chinese Vice Premier Liu He in the Oval Office, after the conclusion of negotiations.

“The farmers are going to have to work a lot of overtime to produce that much,” he said. “So Id suggest the farmers have to go and immediately buy more land and get bigger tractors.”

As part of the agreement, Washington suspended the tariff increases on Chinese goods scheduled to take effect this week.

“Weve been through a very tough negotiation. Theres never been a negotiation like this,” Trump said at the meeting.

He called the agreement “a very substantial phase-one deal,” adding that there will be two or three phases in China trade talks. The president also said that progress was made on currency and foreign exchange issues as well as technology transfer discussions.

Since the beginning of the trade conflict in 2018, Trump has repeatedly accused China of targeting U.S. farmers.

Chinas retaliatory tariffs since last year have affected a host of farm products, including soybeans, corn, wheat, cotton, rice, and sorghum, as well as livestock products. Soybean farmers have been among those hit hardest, as they accounted for nearly 10 percent of total U.S. exports to China before the trade war.

According to experts, Beijings retaliation has been selective and strategic, aiming to hit counties in rural areas in the Midwestern plains and Mountain West states that are Republican strongholds.

Trump said the farmers will now be happy with the phase-one deal.

“It would be a good time to own land in Iowa, Nebraska, and a lot of other great states,” he said.

Beijing no longer believes that it can ride out the trade storm, according to Trump.

“Because if they did, theyd rather deal with a Sleepy Joe Biden, who is failing badly. Hes not going to make it anyway. But whoever does emerge on the other side, theyd probably be better off, maybe, waiting,” Trump said at the meeting.

“But they also know that when I win, the deal gets even tougher,” he said. “And they expect that Im going to win, otherwise, they wouldnt sign the deal. Its very simple.”

Deal is Boon to US Banks

U.S. Treasury Secretary Steven Mnuchin said at the meeting that there was “almost a complete agreement” on the issues of currencies and opening of Chinese financial services markets to U.S. firms.

The agreement would include commitments to transparency around foreign exchange practices.

And opening up Chinese markets to U.S. financial institutions would be “a massive boon,” particularly to large banks and credit card companies, Trump said.

He also said that both sides were very close to finalizing enforcement provisions and “a workable dispute settlement mechanism.”

The phase-one agreement should be completed and signed “over the next four weeks,” Trump said, and the phase-two negotiations would start “almost immediately after” that.

“Were going to be in Chile in five weeks,” he said, implying that there could be “a formal signing” with Chinese leader Xi Jinping. The leaders will meet at an Asia-Pacific Economic Cooperation summit in mid-November.

During their meeting, Liu handed a letter from Xi to Trump.

“We have made substantial progress in many fields. We are happy about it,” Liu said. “Well continue to make efforts.”

When asked whether he brought up the investigation of former Vice President Joe Biden during the negotiations, Trump said, “I have not brought up Joe Biden. China can do whatever they want with respect to the Bidens.”

With respect to blacklisted Chinese telecom firm Huawei, Lighthizer said, “Its not part of this agreement. Thats a separate process.”

Optimism surged on Oct. 10 after media reports suggested there could be a partial agreement between the United States and China.

Trump voiced optimism in a series of tweets on Oct. 11, before his meeting with the Chinese vice premier.

“Good things are happening at China Trade Talk Meeting. Warmer feelings than in recent past, more like the Old Days,” Trump wrote.

In another tweet, he said that “one of the great things about the China Deal is the fact that, for various reasons, we do not have to go through the very long and politically complex CongresRead More – Source

‘Will you support me?’ Putin teases adoring crowd before announcing re-election bid (VIDEO)