Over 60,000 Afghan and Iraqi interpreters risked death to serve U.S. forces, but still wait amid lethal danger for the American visas theyve earned — all while migrants caravaning along Californias border demand immediate entrance based merely on their desire for jobs.

Afghan and Iraqi men who aid U.S. military forces as soldiers and translators do so at the risk of assault and murder from the radical Islamic terrorists who wage war in their respective countries. The silver lining? Aside from the chance to help fight for a better future for their homelands, Afghans who serve U.S. service members as well as cultural guides, translators and brothers in arms qualify for the Special Immigrant Visa (SIV) program, through which they can gain U.S. citizenship. Iraqi interpreters can also apply through the Direct Access Program (DAP).

The SIV program is arduous, however, often requiring interpreters to run lethal risks to themselves and their family members over a period years simply to go through what the interpreters and U.S. service members alike say is an opaque and tedious application process.

Given that many of these interpreters still languish in SIV processing amid threats to their lives, the cry to afford immediate asylum to the Central American migrants amassing at Californias border seems outrageous, according to former Army Staff Sergeant James Miervaldis. (RELATED: Migrant Caravan Lies Exposed By A Border Patrol Agent)

“As the son of a WWII refugee who waited 5 years to immigrate here and proudly became a naturalized citizen, I am puzzled by people who say members of the caravan deserve asylum, but who forget about Afghan and Iraqi translators,” Miervaldis told The Daily Caller News Foundation via email. “These brave men and women have demonstrated allegiance to America by their service. Im sorry, but saving American lives and respecting our immigration laws should be the standard, not an expressed desire for jobs.”

Miervaldis served at Afghanistans national security court on the outskirts of Bagram Airfield from 2011 to 2012. He and his fellow service members helped develop a system used to this day to prosecute members of the Taliban, Al Qaeda and other groups under Afghan law.

Miervaldis view of the migrant caravan is shared among interpreters who have or are waiting to enter the U.S. and start new lives with their families, according to GOP Rep.-elect Mike Waltz of Florida.

Waltz, a former Green Beret, served several combat tours in both Iraq and Afghanistan, earning four Bronze Stars, two of which he was awarded for valor. He also sponsored two Afghan soldiers through the SIV program and helped them gain U.S. visas. One would be hard pressed to find anyone more incensed over the support for the migrant caravans demands, Waltz said, than interpreters who have gone through the SIV program.

“Especially in the case of the special immigrant visa applicants, [who] literally are under the threat of death, beheading, their family being killed or harmed — and they go through all of that to come here, and then to see folks jumping ahead or not playing by the rules is really upsetting to them,” Waltz added.

Interpreters serve an integral role to U.S. operations in Afghanistan and Iraq, doing far more than the title of “interpreter” implies. They served as a window to the communities among which the U.S. military operated, helping U.S. forces to navigate cultural boundaries and customs, to distinguish between friend and foe, and to forge relationships with locals, and to communicate with allied Afghan forces — a fact that insurgent groups like the Taliban know all too well. 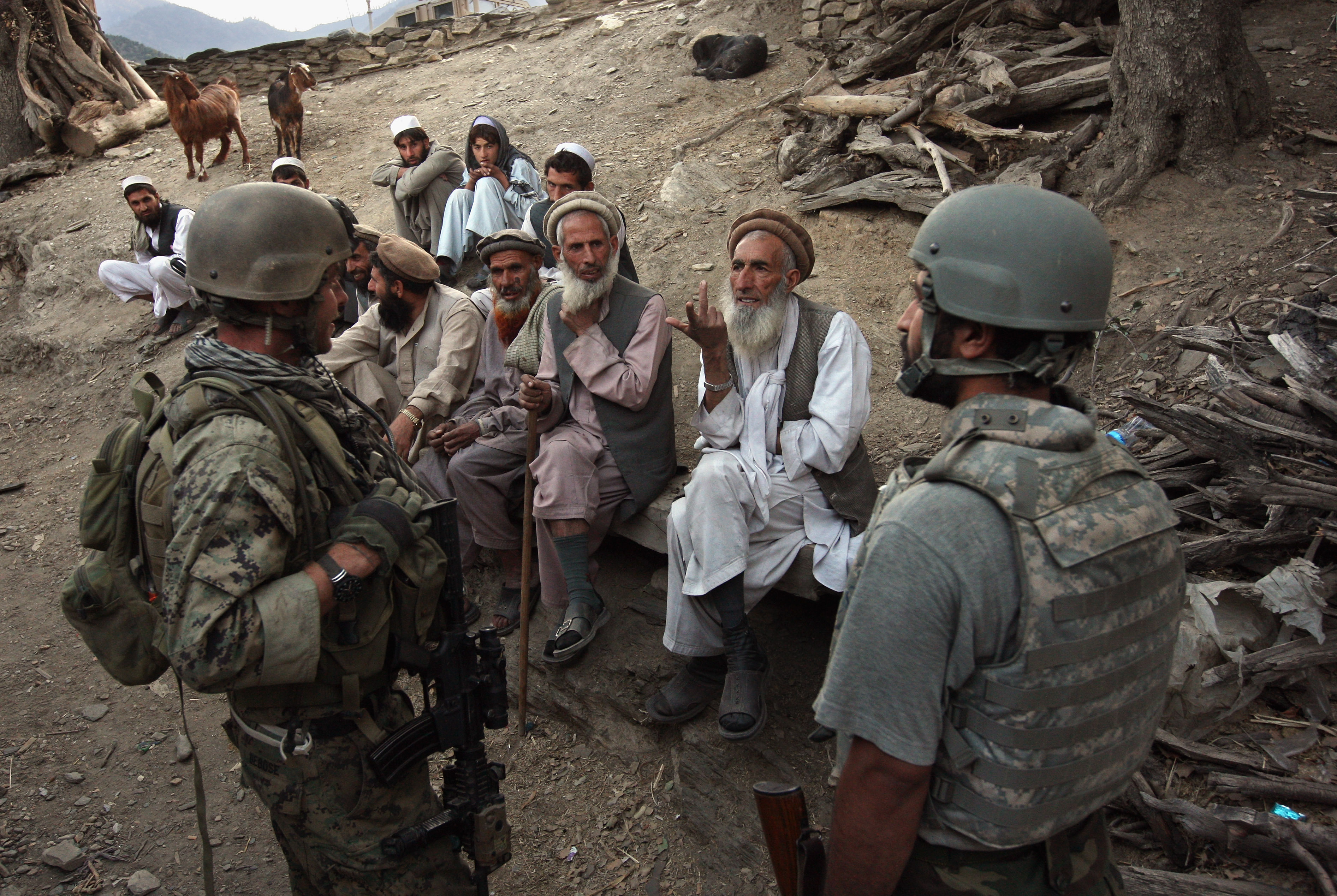 KORENGAL VALLEY, AFGHANISTAN – OCTOBER 25: Village elders speak with a U.S. Marine (L), through an interpreter as American and Afghan forces search for weapons on Oct. 25, 2008 in the Korengal Valley of Kunar Province in eastern Afghanistan. (Photo by John Moore/Getty Images)

“The Taliban … they are trying to shoot the translator first, because if they kill the translator, there is no communication between the U.S. forces and Afghan forces,” former Afghan translator Janis Shinwari told No One Left Behind. 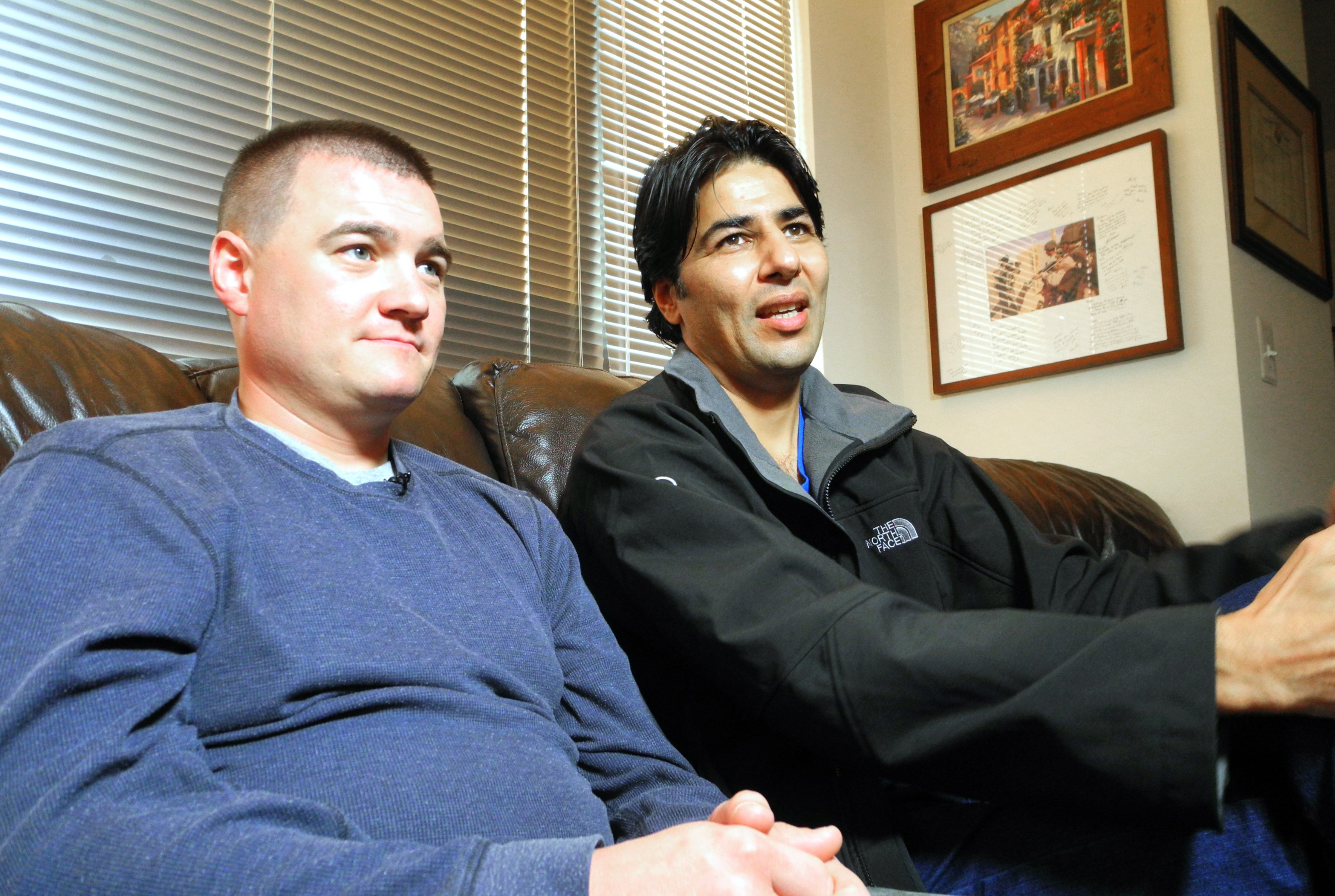 U.S. Army Captain Matt Zeller (L) with translator Janis Shenwari, whom he credits for saving his life in a firefight in Afghanistan in November 2008, and who, after five years of struggle, is one of the lucky few who was able to take advantage of the special Visa program for Afghanistan interpreters.(Guillaume Meyer/AFP/Getty Images)

It took Janis two years to get his visa through the SIV program.

“Its really hard to wait two years to get your visa, because each minute of your life you will think somebody will kill you,” Janis said.

Miervaldis personally sponsored the translator he worked with through the SIV program — a process that, for him, took three years.

“I thought it would be quick because all his paperwork was in order,” Miervaldis told TheDCNF. “He had been polygraphed more times than I had. Later I learned that the SIV process is designed to be independent from DoD base access counterintelligence screenings and letters of recommendation from senior military leaders.”

Miervaldis said that not even a certificate of appreciation from the U.S. ambassador helped his interpreters SIV application. He personally worked with members of Congress to hound the State Department every six months about where his interpreters application stood.

“From the time I engaged Congress to his acceptance, it took one year making it 3 years in total,” Miervaldis said.

Most interpreters tell their family and friends that they are working for an international nongovernmental organization (NGO), for fear that terrorist groups would hunt them down if they got word that an interpreter was aiding U.S. forces. The SIV process can take anywhere from one to 10 years for interpreters — time that increases the likelihood of being hunted down by local insurgent groups. 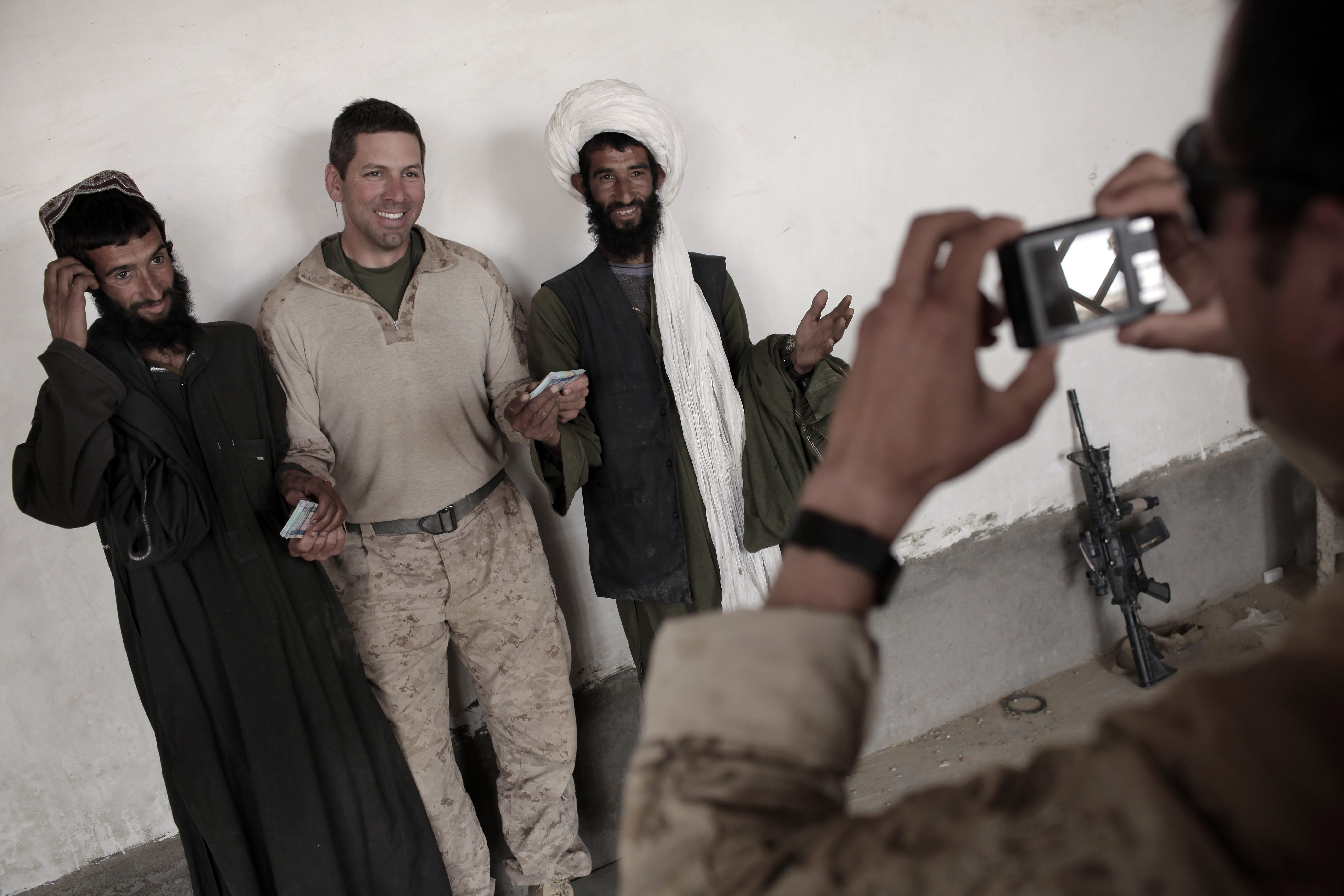 An interpreter for U.S. Marines of India Company, 3rd Battalion, 6th Marines takes a souvenir picture requested by the U.S. officer giving 20,000 Afghanis each to two brothers for damages to their residences caused during the ongoing U.S. military offensive against Taliban insurgency, in Marjah, Helmand province, southern Afghanistan, on April 12, 2010. (MAURICIO LIMA/AFP/Getty Images)

Waltz worked with an interpreter in 2005 and 2006 who, years later, was followed from a U.S. military to his home. Terrorists dragged him and his family members outside their house and beheaded them for working with U.S. forces. Miervaldis also spoke to the dangers that beset interpreters. One interpreter he worked with was assaulted and received death threats.

Instances of execution, torture and assault are unfortunately common for interpreters. The Iraqi Refugee Assistance Project estimated in 2014 that one Afghan is killed every 36 hours due to their affiliation with U.S. forces.

The threat of such a death remains when interpreters apply for visas through the SIV program, especially if they live in a remote region in Afghanistan. The application process entails multiple interviews with the State Department in Kabul, which makes for a treacherous journey for those who must travel through Taliban held areas with their identifying documents to make it to the interviews.

“Oftentimes in these Taliban held areas, they will set up their own checkpoints and theyre looking for any kind of identification, any kind of badging,” Waltz told TheDCNF. “So here these guys are with all of their documents to prove that they have worked with us and have everything signed off on the military side to take to the embassy and yet those very documents are what could implicate them and expose them as they go through Taliban held areas and get them killed.” 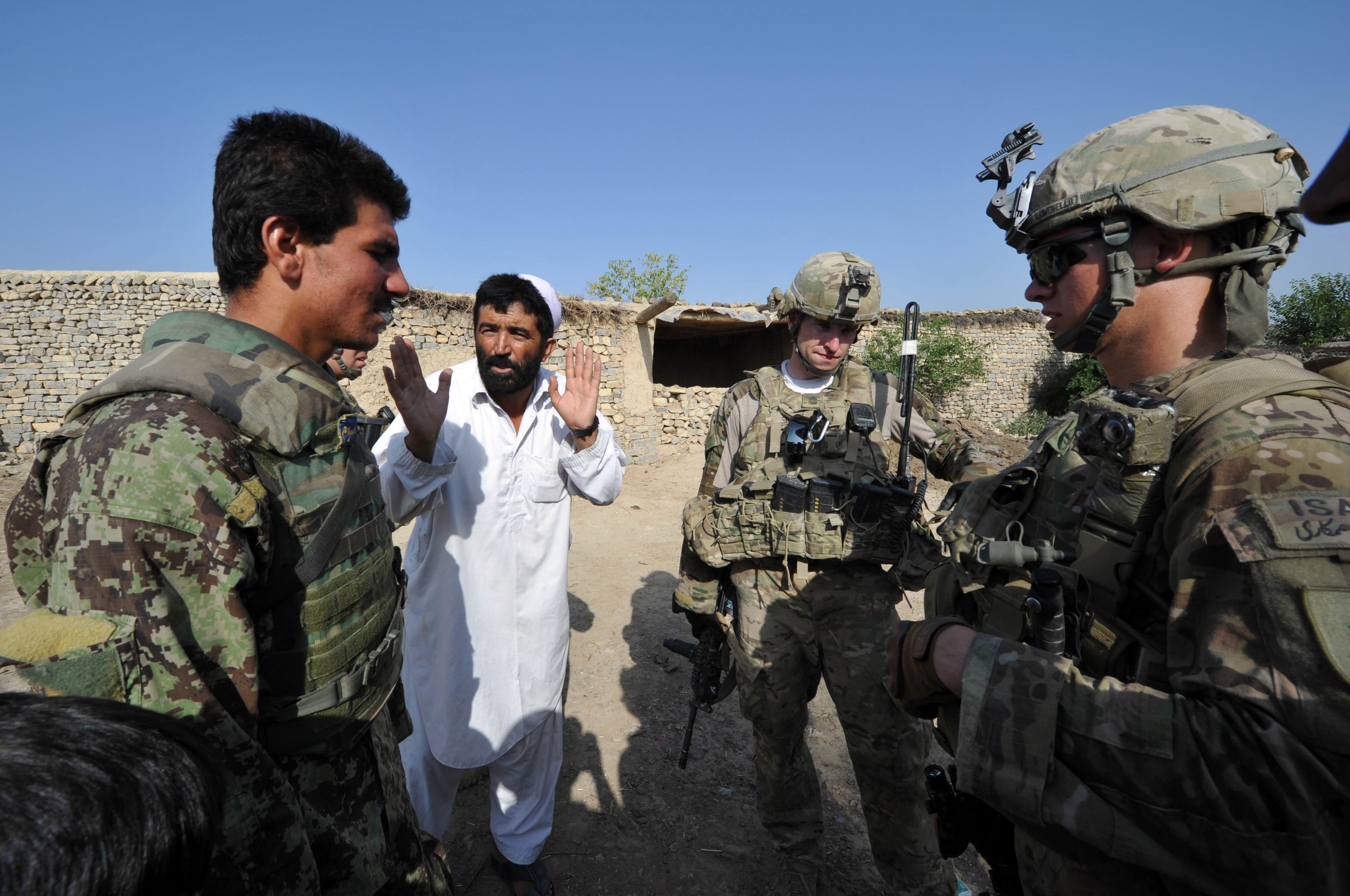 An Afghan soldier (L) serves an interpreter as a civilian talks to U.S. soldiers from Viper Company (Bravo), 1-26 Infantry during a patrol at a village near Combat Outpost (COP) Sabari in Khost province in eastern Afghanistan on June 19, 2011. (TED ALJIBE/AFP/Getty Images)

Despite Afghan and Iraqi interpreters service to the U.S. and the risks to life and limb that they faced, politicians like Democratic Rep. Beto ORourke of Texas and Democratic Rep.-elect Alexandria Ocasio-Cortez of New York and advocacy groups promoted the cause of the migrants who beset the U.S.-Mexico border, to the point of demonizing U.S. Border Patrol. Ocasio-Cortez even compared the plight of the migrants, who have demanded either entrance and jobs or simply to be paid to leave, to that of Jews who fled the Holocaust.

Despite reports that the caravans consist of women and children, eyewitness accounts characterize it more as a steady flow of young men looking for work — men that Keith Bowden, who authored “The Tecate Journals” and interviewed several members of the caravan, characterized as “punks” who he wouldnt even trust to do lawn work.

The interpreters who apply for the SIV program, by contrast, have not only demonstrated service, leadership and commitment to American values, but are also some of the most educated among their communities, according to Waltz. Many are teachers or professors, everyday civilians, who can speak multiple languages and who chose to take up arms to fight for the chance for their daughters and wives to live in a world where they are allowed to be educated, to protect their sons, and at times to defend the U.S. soldiers with whom they work.

“SIVs are patiently following U. S. immigration law out of respect for our system while the Taliban hunts them down,” Miervaldis told TheDCNF. “They have never been made a priority since the program was created. SIVs are the best example of legal, merit based immigration and should be highlighted as such. The U.S. has an opportunity to ensure a generation of allies can realize the American Dream. This is how we defeat Islamic extremism in the long run.”

Content created by The Daily Caller News Foundation is available without charge to any eligible news publisher that can provide a large audience. For licensing opportunities of our original content, please contact [email protected]