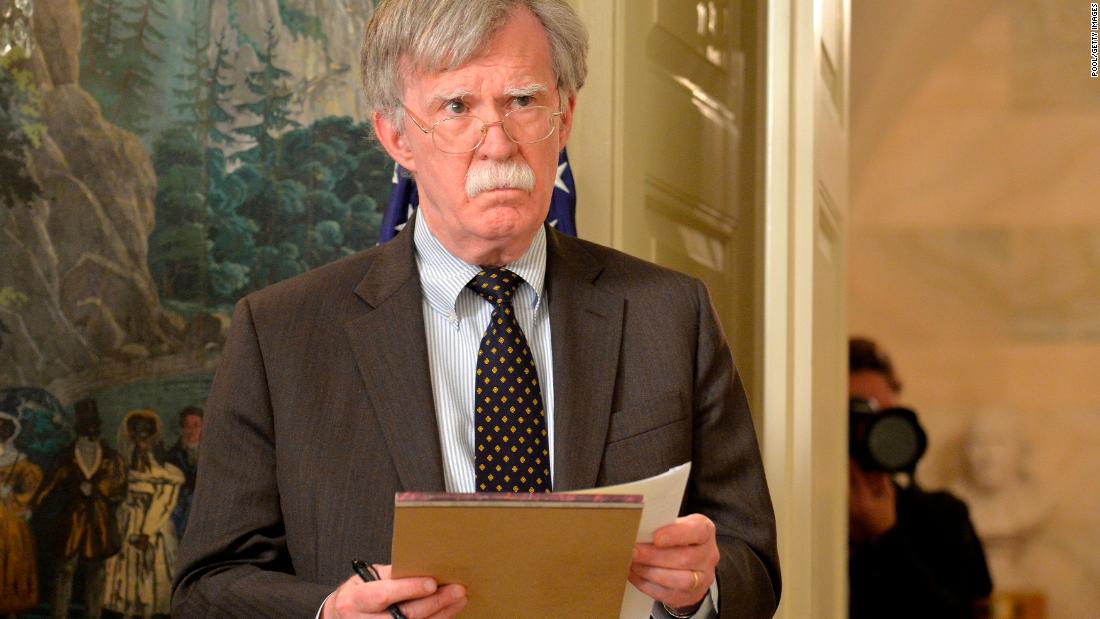 Anyone with an internet connection can watch the shaky footage showing the one-time strongman as he is bloodied, pummeled, grabbed by the hair, stripped and led to his death. Later, his body lay in a refrigerator for several days for Libyans to gawk at, in violation of Islamic tenets that say the dead should be buried before the sun sets on the day they die.To North Koreans, that's the "Libyan model of 2003, 2004." Unintentionally or not, it was also the image evokedby White House National Security Advisor John Bolton on April 29, when he suggested nuclear talks with North Korea could emulate the 2003 negotiations with Libya.To North Korean leader Kim Jong Un, set to meet President Donald Trump on June 12 in Singapore, that's a non-starter. Bolton's comments so incensed Pyongyang that the regime singled out the one-time undersecretary of state for arms control in a blistering statement on Wednesday."It is absolutely absurd to dare compare the DPRK (Democratic People's Republic of Korea), a nuclear weapons state, to Libya, which had been at the initial stage of nuclear development," said Kim Kye Gwan, the first vice-minister of Foreign Affairs for North Korea. "We shed light on the quality of Bolton already in the past, and we do not hide our feeling of repugnance towards him," Kim continued in the statement released by the state-run Korean Central News Agency. The tone of Kim's statement, however, maintained a respectful tone for President Trump, saying he hopes the "Trump administration takes an approach to the summit with sincerity for improved relations," which, Kim said, "will receive a deserved response from us."By focusing their ire on Bolton — he didn't even merit an honorific in Kim's missive — the North Koreans kept the door open to positive relations with Trump, while signaling that Bolton at the table in June would not be in the US leader's interest.

So, are the North Koreans trying to get Trump to ditch his hardline adviser?"They're just trying to knock Bolton off his perch before the summit, and Bolton talking about Libya is really stupid, to just bring up this idea is stupid, because you know it's going to scare people away," said Joseph Siracusa, a professor of human security and international diplomacy at RMIT University in Melbourne, Australia."They're going after this guy and what they're telling the President is not so much chain him down, but shut him up," Siracusa told CNN.The reaction from Pyongyang confirms what many experts have long said: That the regime pays close attention to what is being said about it overseas, especially in the United States, and further, that it is constantly looking for ways to manipulate events to suit its agenda."North Korea is extremely observant of US politics, it has made it a national pastime, they have enormous staff dedicated to observing the United States, and the officials who work on negotiations have decades of experience of working with the Americans," said Adam Mount, a senior fellow and director of the Defense Posture Project at the Federation of American Scientists, where he covers US nuclear strategy, deterrence and North Korea.To the North Koreans, the high expectations surrounding the proposed summit offer multiple opportunities to attempt to manipulate the US, especially now that the prospect of a Nobel Peace Prize is suddenly in the mix.A group of House Republicans have nominated Trump for the prestigious award and the word "Nobel!" has been on the lips of crowds at several of Trump's' most recent rallies. Trump himself has said while "everyone thinks" he deserves a Nobel for his efforts with North Korea, he "would never say it." "The prize I want is victory for the world. Not for even here, I want victory for the world 'cause that's what we're talking about. So that's the only prize I want," Trump said on May 9."They know Trump wants some great success," said Siracusa, adding that it's likely that Kim Jong Un would have gotten tips from Chinese President Xi Jinping on how to approach Trump. Kim and Xi have already met twice in the lead-up to the summit. On Wednesday the Chinese foreign minister pressed for compromise, noting in a statement that the "initiative taken by North Korea is worthy of full recognition. All other parties, especially the United States, should cherish the current opportunity for peace." He added that it is "necessary to prevent the situation while one party shows flexibility, the other party becomes tougher. There are such lessons in history. We don't want to see this happen again." Only recently Trump's administration accommodated China by declaring it would find a way to spare Chinese technology company ZTE from a crippling export ban. "I think Kim has been taking lessons from Xi, the Chinese know how to play him (Trump) perfectly," said Siracusa. Disagreements between a Trump trade adviser and Treasury Secretary Steven Mnuchin over trade talks with Beijing flared earlier this month, resulting in the adviser — Peter Navarro — being sidelined from this week's round of talks with Chinese officials in Washington.

'Counting on a cordial and successful summit'

The statement from North Korea minister Kim Kye Gwan on Wednesday excoriating Bolton included a warning that North Korea would pull out of the meeting with Trump if it was forced to unilaterally denuclearize, something Bolton is pushing. "North Korea probably senses that Trump is counting on a cordial and successful summit to boost his reputation as an international statesman, especially ahead of US mid-term elections in November," noted analysts at research group BMI Research. "Pyongyang is thus implying that 'denuclearization' (if it happens at all) must be a phased process with rewards accompanying each stage."That flies in the face of what Bolton wants, and his rhetoric has distanced him even from the softer tones his boss has been voicing lately. Sidelining him would give North Korea a better hand when the time for negotiations comes.Speaking to CNN, Seong Whun Cheon, a visiting research fellow at the Asan Institute for Policy Studies said North Korea probably does not expect Trump to outright fire Bolton, but likely believes it can influence Trump's calculations, especially in regard to key negotiation points. "I'm concerned that North Korea has a good grasp of Trump's shaky political situation and is confident it can manipulate Trump to a certain extent," said Cheon, a former South Korean government official who worked in the defense and unification departments.Even before his return to the fold under Trump, Bolton has long been synonymous inside North Korea with a more hawkish and unreasonable style of US diplomacy, suggested policy expert Adam Mount. "North Korea has never believed Bolton was a credible interlocutor interested in diplomacy," said Mount. "Bolton has come to represent a particularly radical demand for immediate disarmament that is done essentially on faith that there would be future incentives.""Bolton's hardline and unrealistic statements have led many to question whether he is committed to negotiations or prefer they collapse," Mount added. On April 29, Bolton told CBS News that North Korea needed to present real evidence that it was giving up its nuclear weapons. When asked if the US would promise North Korea that it would not invade its country if Kim Jong Un abandoned his weapons, Bolton dodged the question. "We've heard this before. This is, the North Korean propaganda playbook is an infinitely rich resource," he said.In 2003 Libyan leader Col. Moammar Gadhafi agreed to abandon the country's attempts to develop a nuclear weapon and admitted international inspectors to verify that its nuclear sites had been dismantled. At the time, then-US President George W. Bush said Libya's decision would help lift it out of isolation. "Libya has begun the process of rejoining the community of nations," Bush said in December 2003. "Old hostilities do not need to go on forever. I hope that other leaders will find an example in Libya's announcement today."UN officials speculated that Gadhafi had been spooked by the invasion of Iraq and the ousting of dictator Saddam Hussein. Only days after Bush spoke, Saddam was captured by US troops.Years later, however, the Arab Spring consumed the Middle East, and Gadhafi, under pressure to step down, found no support from the West. NATO warplanes policed a no-fly zone over Libyan skies, preventing Gadhafi from striking at rebel forces. After rebel forces took the capital he went into hiding. He was eventually found in his hometown of Sirte, where rebels beat him and shot him in the back of the head.