The choreographed display involved hundreds of soldiers marching in unison,planes soaring above and four of Pyongyang's newest and most sophisticated missile, the Hwasong-15. North Korean leader Kim Jong Un watched all of it from a balcony above. The parade is being held to mark the day Kim's grandfather, Kim Il Sung, formed the Korean People's Army, and came as celebrations started in the South for the Games in the resort city of Pyeongchang.Kim and his wife, Ri Sol Ju, arrived by limousine and stepped out onto a red carpet. Kim arrived at last year's military parade in the same fashion but without his wife by his side.Wearing a black fedora, the North Korean leader spoke from the balcony, addressing his people about the scourge of imperialism and the need to address it. 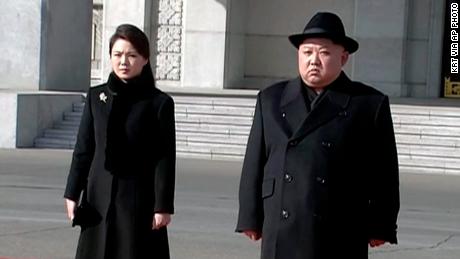 Kim declared that the military parade would show to the world that North Korea" has developed into a world-class military power." "As long as imperialism is present on the Earth and US's hostile policy against North Korea continues, the mission of the Korea People's Army to be the strong sword that protects the country and people, and peace can never change," the North Korean leader said. "The final victory lies to our party and people who is holding the gunstocks of revolution," Kim added. 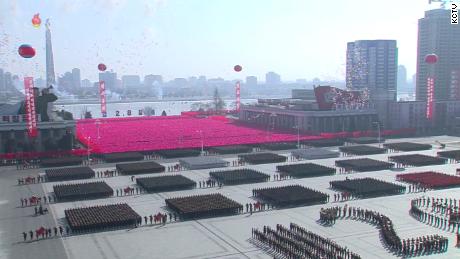 After the address, what appeared to be a bevy of North Korea's latest intercontinental-range ballistic missiles (ICBMs) were brought out on top of mobile launchers. However, the missiles themselves may not be viable — some believe that Pyongyang does not trot out viable missiles out of fear of an accident. Unlike last year's parade, North Korea did not introduce the world to any new missile systems."This was a much more grounded military parade in the sense that these are real systems they have actually tested," said Dave Schmerler, a research associate at the Middlebury Institute for International Studies' Center for Nonproliferation Studies.An official at South Korea's Defense Ministry told CNN that compared to last year, the parade's content and scale both "seem to have been reduced." South Korean news agency Yonhap reported that as many as 50,000 people gathered in the city's Kim Il Sung square to watch the event, which included around 13,000 soldiers. Diplomatic sources told CNN last month that "hundreds" of rockets and missiles would be featured during the display.The parade began at 10:00 a.m. Pyongyang time, a diplomatic source with deep knowledge of North Korea's activities told CNN. At around the same time, hundreds of North Koreans who are in South Korea for the 2018 Winter Olympics attended a welcoming ceremony in Pyeongchang.

A diplomatic poke in the eye

Pyongyang's decision to hold a military display so close to the start of the Games is viewed by many as a poke in the eye to the administration of South Korean President Moon Jae-in, which has gone to extra lengths to present these Olympics as a symbol of peaceful cooperation.International media wasn't invited into North Korea to see the parade, but North Korean state media aired footage after it finished on Thursday. The footage was tightly put together, and included shots from what appeared to be drones above the soldiers and wide-angle action cameras mounted on the front of trucks.It's unclear if the video was altered in any way, as North Korea state media has been caught modifying its imagery before.Shortly before the parade was broadcast on state media, images trickled out on social media. 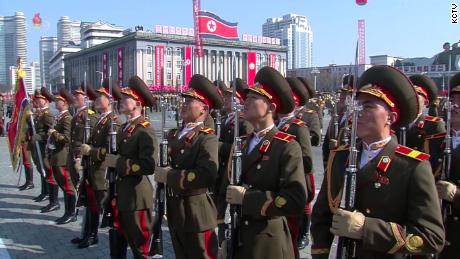 Michael Spavor, who runs a cultural exchange business that facilitates trips into North Korea, shared images showing what appeared to be hundreds of bystanders standing by a main thoroughfare in Pyongyang, with soldiers in trucks and atop tanks waving to them. 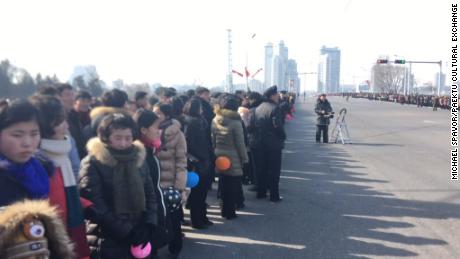 The North's participation in the Games was the result of painstaking diplomatic negotiations between Seoul and Pyongyang — the first of their kind in nearly two years. North Korea is sending a delegation of athletes, performers and high-ranking officials, including the country's premier and Kim Jong Un's younger sister, Kim Yo Jong, who is believed to be one of his most trusted advisers. 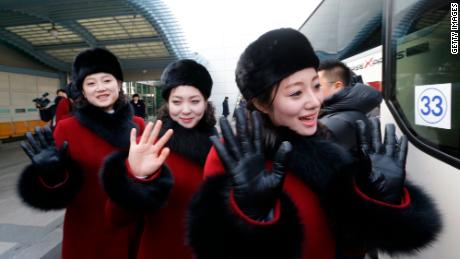 At the welcome ceremony Thursday, band members dressed in white suits and red coats played traditional music, and North Koreans, wearing red, white and blue uniforms, waved at the crowd. A spokesman for Moon announced he will meet members of the North Korean delegation, including Kim Yo Jong.Getting the Americans and North Koreans in the same room to talk, however, is unlikely. North Korea's Foreign Ministry said Thursday "we have no intention to meet the US side during our visit to South Korea," and US Vice President Mike Pence — who is leading the American delegation — said he hadn't requested a meeting, but "we'll see what happens."While US President Donald Trump and other high-ranking officials in Washington have praised the inter-Korean talks this year, the White House has gone to extra lengths to make sure Pyongyang does not succeed in using the Games for its own PR purposes. "We will not allow North Korean propaganda to hijack the message and imagery of the Olympic Games," Pence said after meeting with Japanese Prime Minister Shinzo Abe.Pence also announced Wednesday the Trump administration plans to unveil what he called toughest and most aggressive" sanctions yet against North Korea.

CNN's Will Ripley and Sol Han contributed to this report

Who is Kim Yo Jong?

Who is Kim Yo Jong?