Monkeygate doctor says car firms were not kept in dark

The German scientist behind the controversial experiments on monkeys to test the harmful effects of diesel exhaust fumes says there is no way senior management at the carmakers including BMW, Volkswagen and Daimler did not know about the trials.

Helmut Greim, who chaired the research advisory board of the now-defunct European Research Group on Environment and Health in the Transport Sector (EUGT) that commissioned the monkey trials, said representatives from all three carmakers met with his team on a quarterly basis to discuss the think tank’s work.

All the carmakers have distanced themselves from the live trials carried out in the U.S. — which included caging 10 monkeys to assess prolonged exposure to emissions — and have sought to place the blame on junior employees. Both Volkswagen and Daimler have also suspended employees with ties to the monkey tests. The idea for the tests, reported last week by the New York Times, was to see if modern diesel engines were cleaner than older engines, and if diesel exhaust was a carcinogenic.

“The bosses of Volkswagen and Daimler Benz and BMW they respond that they don’t know anything about that. That’s not true,” said Greim, an 82-year-old professor at the Technical University of Munich, in an interview with POLITICO. He is also a member of the European Commission’s Scientific Committee on Occupational Exposure Limits. 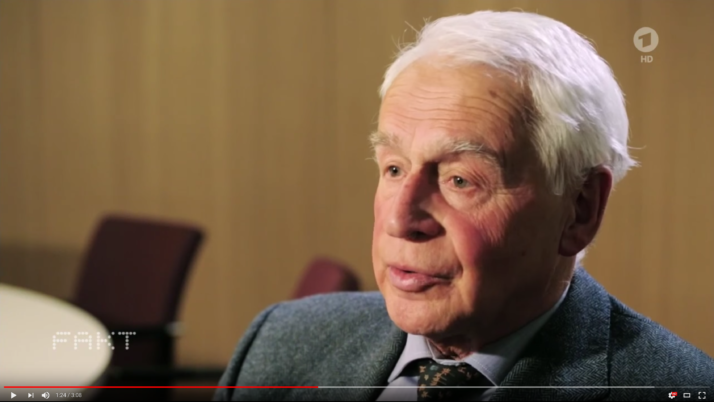 Helmut Greim, the German scientist behind the experiments | ARD.de via YouTube

“We had about three to four meetings per year … In all these cases the representatives of the different companies — BMW, Volkswagen and Daimler — always attended these meetings so they have always been informed what we are doing,” Greim added.

Asked if there was a constant link between the carmakers and his scientific institute he said: “Sure, definitely.”

The auto giants co-funded the EUGT’s work before it was finally closed in 2017.

On Tuesday, Volkswagen suspended its chief lobbyist Thomas Steg over the allegations, with Bild reporting that the executive knew about the tests in May 2013. He will “assume full responsibility” for the scandal, according to a statement from Volkswagen CEO Matthias Müller. And Daimler on Wednesday suspended Udo Hartmann, who represented the company on EUGT’s board.

Frank Hansen, a junior BMW manager, sat on the EUGT’s board between 2012 and 2015 and is still at employee at the Munich-based carmaker. Hans-Georg Kusznir, a close associate of Thomas Steg, was VW’s direct representative at the think tank.

VW, Daimler and BMW have all now launched internal investigations into the affair, with the latter companies insisting they had no influence on the testing process.

“We are of course asking ourselves if there had been a chance to pull the brake,” a BMW spokesperson said of the internal investigation now underway.

Revelations that Germany’s largest carmakers knowingly engaged in live trials has added yet another layer of controversy to the Dieselgate emissions scandal that has landed Volkswagen in deep trouble in the U.S. and the EU.

Last year, Volkswagen pleaded guilty to U.S. federal fraud charges and was ordered to pay more than $25 billion in fines, settlements and recalls after it was revealed the company had installed cheat devices aimed at lowering car emissions during testing. The EU is revamping the way it permits new car models and is pressing VW to compensate European car owners over its emissions cheating.

The tests on monkeys were conducted in 2014 and were first disclosed in a lawsuit brought against Volkswagen in the U.S. and reported by the New York Times this month. A separate report outlined tests on human subject.

Greim said the idea was the brainchild of the EUGT to observe the effects of pollution inhalation on the lungs. He said the trials, conducted in Albuquerque, New Mexico, were approved by an ethics committee.

“I am talking facts. There are a lot of people who don’t want these facts — Helmut Greim

Adding to the scandal, the VW Beetle engine used in the live tests were fitted with a cheat device so that pollution levels were far less harmful than when used on the road. Similar devices were installed in the software systems of around 11 million vehicles sold worldwide by the carmaker.

“The orientation was always to have a tolerable concentration of NOx,” Greim said, referring to the nitrogen dioxide pollution emitted by diesel engines that is one of the main ingredients of smog. “The studies in monkeys and the studies in humans which have been performed had nothing to do with the evaluation of carcinogenicity.”

Greim’s involvement in the monkey tests is not the first time the German scientist has been linked to controversial scientific research.

In 2015, Greim conducted a peer-reviewed study drawing on tumor data from 14 carcinogenicity studies on rats that deduced glyphosate — a popular weedkiller often sold under Monsanto’s Roundup brand — is not carcinogenic. The Commission late last year reapproved the chemical for five years after a long political battle.

Greim has also participated in research evaluating endocrine disruptors, a chemical used in some pesticides that is blamed for disrupting hormonal activity in humans. Greim was among of a group of scientists who wrote to Anne Glover, the former chief scientific adviser to the president of the European Commission, to complain about the approach in Brussels to place stricter controls on pesticides containing endocrine disrupting chemicals.

“I am talking facts,” he said. “There are a lot of people who don’t want these facts. They are against industry and in many cases the facts agree with the position of industry, but that’s not my fault.”