"It was maybe two or three meters from me and the eyes were bright red, reflecting my light. I was so frightened," Testa, a cave expert said. In the course of his work, Testa has come across many weird and wonderful sightings — but none as bizarre as this orange reptile with blazing red eyes.Testa and his colleague crocodile expert Matt Shirley first visited the site in 2009 after an archeologist named Richard Oslisly spotted the crocodiles in the cave. They have visited the location in an isolated region of Gabon six more times. "First we confirmed that there were crocodiles in the cave and when we took one of them outside the cave, it was bright orange. That was amazing," Testa told CNN. Little is known about the mystery crocodiles. However, recent research led by Shirley suggests that they may be evolving into a totally new species. The species may be mutating as it has a different genetic haplotypeto other African dwarf crocodiles living outside, which means that the reptile is adapting to life in the dark. "The crocodile head shapes are much more archaic, brow ridges very marked, and the haplotype is a 1 haplotype found exclusively in the Abanda caves and nowhere else, including just outside," Oslisly told CNN.

Why are they orange?

Perhaps the most puzzling mystery is the color of the crocodiles.They're not certain, but the scientists think it might be because of acidic bleaching."The crocodiles live in liquids — that's guano (bat feces) — and it's quite a harsh environment. There's a chemical attack on the skin and it bleaches the skin. But we don't have means to prove that," Testa told CNN. 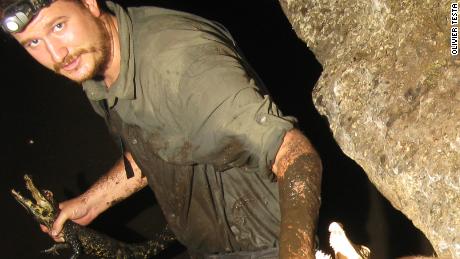 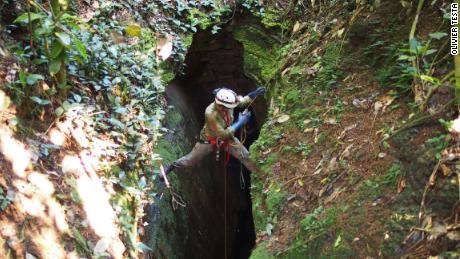 The crocodiles inhabit the Abanda caves in a remote area with around 20 other cave systems. "The area is very remote. There's no road access. You need to go by boat from the nearest town for one day, and then you need to stay in the forest to access the cave," Testa said. Testa said crocodiles usually leave the caves to lay eggs, but these crocs may have been trapped — and that's why they are different. 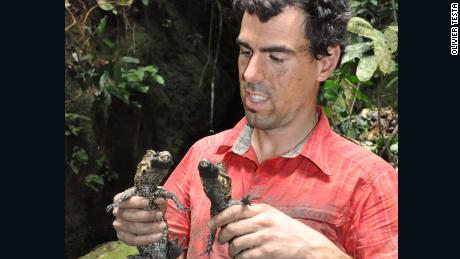 "Maybe it's just the reproduction within a very small population. If you take 100 human beings and you put them together for 1000 years, they start mutating because they just reproduce between themselves," Testa said. They tested blood samples from the crocodiles found in the caves, and compared them with 200 outside crocs in the area. It's tricky for scientists to defines the parameters of what is a new species, but the genes and diet differentiate them from other crocodiles. And what would an orange crocodile eat? Well, bats of course. "We found one skeleton of a bat in the crocodile's digestive system, and lots of stuff in their diet like crickets, snails and shells," Testa said. The group say they have plans to define the boundaries of the habitat so they can classify the area as a sanctuary.