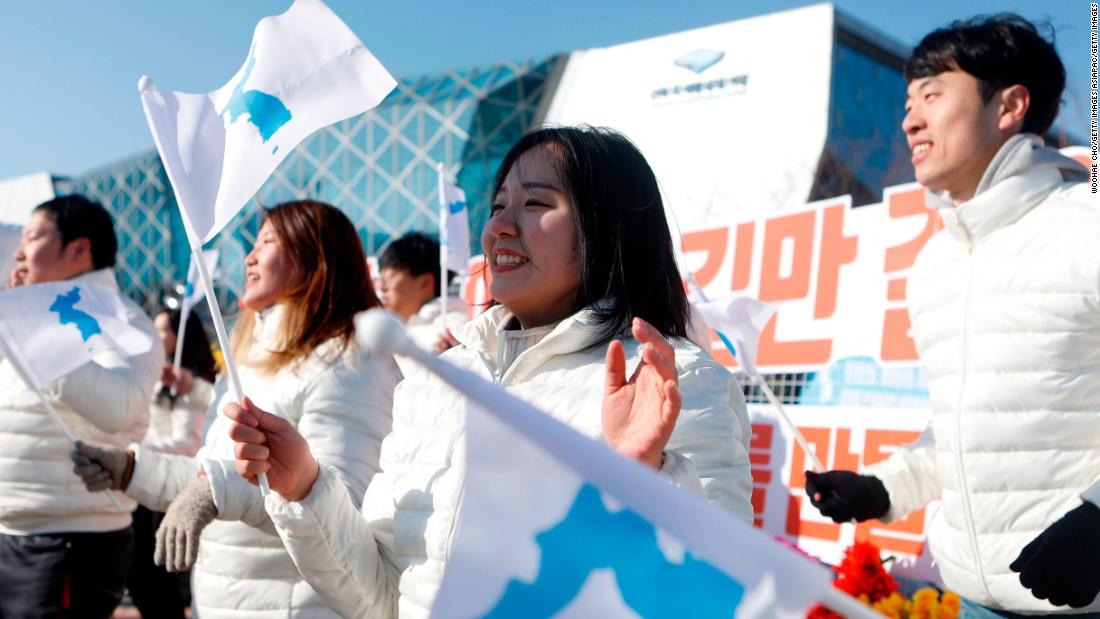 In a move sure to annoy Pyongyang, US Vice President Mike Pence will take the father of the late Otto Warmbier, an American student who was jailed in North Korea, to the Opening Ceremony, the Washington Post reported Sunday.Meanwhile, North Korea is sending Kim Yong Nam, the head of the country's parliament, who is one of the most senior North Korean officials to ever visit South Korea.On the eve of the Olympics, Pyongyang will stage its own international show with a parade of hundreds of missiles and rockets, sending the world a clear message that its military might is not to be underestimated.

The political point-scoring between the US and North Korea started well in advance of the Games.During a highly emotive section of US President Donald Trump's State of the Union speech last week, the President called out North Korea's leadership, with special reference to the human cost. "No regime has oppressed its own citizens more totally or brutally than the cruel dictatorship in North Korea," said Trump. The speech, which was attended by both the parents of Otto Warmbier, Cindy and Fred, and North Korean defector Ji Seong-ho, saw Trump dismiss recent diplomatic efforts, casting the threat posed by Pyongyang as ever present. "Past experience has taught us that complacency and concessions only invite aggression and provocation. I will not repeat the mistakes of past administrations that got us into this dangerous position." On Sunday, an aide to Pence reportedly said the Vice President will deride any notion of normalizing North Korea's relationships with the outside world while he is in South Korea for the Olympics. "We will not allow North Korea's propaganda to hijack the messaging of the Olympics," the aide told Axios, a strategy Fred Warmbier's presence would seem to fit. Otto Warmbier died soon after his release from North Korean prison last year, and his parents have accused Kim Jong Un's regime of torturing him during detention."Otto was systematically tortured and intentionally injured by Kim Jong [Un] … Kim, and his regime. This was no accident," he told CNN in September.Warmbier was taken into custody by North Korean authorities during a five-day sightseeing tour of the reclusive state, which accused him of stealing a political poster from a restricted floor on his hotel.When Otto arrived back in the United States he was in a persistent vegetative state. North Korea claimed he had contracted botulism while in prison.Fred Warmbier's attendance at the Games will likely see him placed in close proximity to some of North Korea's top politicians as they welcome a joint Korean team marching under a flag representing a unified peninsula. Previously, Pyongyang has been sensitive to criticism around North Korea's participation in the Games, canceling a joint cultural performance that was to be held in advance of the Olympics in response to unflattering coverage by the South Korean media. Rodger Baker, vice president of strategic analysis at Stratfor, said the North's recent rapprochement is seen in the US "not as an opening towards dialogue but rather as a delaying and stalling tactic to weaken the US-South Korean relationship." North Korea has been clear that current talks will not encompass, or move towards discussing denuclearization, and Baker said Washington is keen to demonstrate that its approach to Pyongyang has therefore not changed. "The US is trying very hard to emphasize there is no pause or delay to the containment strategy," he said, with US-South Korean military exercises suspended for the duration of the Olympics due to restart as soon as the Games are finished. Improved relations between the two Koreas is something the US is uncomfortable with under the current conditions, said Anwita Basu, an analyst at the Economist Intelligence Unit (EIU). "These games are being treated as a platform for diplomatic warfare by both the US and North Korea … tensions will certainly rise as a result," she said.

For its part, North Korea has also offered confused messaging. It said this weekend the country's delegation to the Olympics will be led by Kim Yong Nam, chairman of the standing committee of the Supreme People's Assembly, the head of the country's parliament. Kim, who turned 90 this month, is a former minister of foreign affairs and in his current position is one of the country's top three officials, alongside leader Kim Jong Un. In a statement, South Korea's Unification Ministry said Kim Yong Nam's presence shows Pyongyang's seriousness in seeking to improve inter-Korean relations and the successful hosting of the Winter Olympics. But before Kim sits down to watch the ceremony, North Korea will be staging a massive military parade featuring dozens of long-range missiles, which a diplomatic source told CNN last week is designed to "scare the hell out of the Americans." Baker said Stratfor anticipates North Korea "will continue (missile) testing this year, they're too close to the end of the program to simply stop and give up."This could include more ballistic missile launches, submarine launches, or even an above-ground nuclear test over the Pacific, he added.

One player who risks being overshadowed in all this political gamesmanship is South Korea. North Korea's participation in the Olympics has already become the biggest story from an already ultra-politicized games, sparking grumbles in South Korea that the country is being forgotten in what should be its international moment, particularly after officials decided to merge the North and South Korean women's hockey teams and march under a unified flag in the Opening Ceremony. "It was really difficult for South Korea to get the opportunity to host the Olympics," an anti-North Korea protester told CNN outside a hockey venue Sunday. "And now we are not even allowed to hold up our own flag. Instead, we have to cheer with the unified flag."Diplomatic wins may also be limited. Baker said Seoul's "immediate concern is to ease the sense of imminent conflict on thepeninsula" but the recent moves by the Trump administration risk undermining "any even short-term gains the South Koreans may be able to get." The situation puts South Korea in a "delicate bind," said Basu. "The US are not happy about normalization in the inter-Korean relationship but at the same time, US military presence in the Korean Peninsula is vital and cannot be easily withdrawn."