More than 130 people have been killed in four attacks over the past nine days, starting with a deadly hotel siege in Kabul which left at least 22 people dead.The Taliban have claimed two attacks while ISIS says it is behind the others, including Monday's military base assault, raising the possibility of a deadly competition between the two terrorist groups.Meanwhile, the fact a military base in the center of Kabul was vulnerable to attack raises questions over the Afghan government's ability to protect itself."This is all about the deterioration of security inside what was supposed to be known as the 'ring of steel,' the Afghan capital of Kabul … (ISIS) appears to be in a race for the low ground of extremist brutality with the Taliban," CNN's Nick Paton Walsh said. 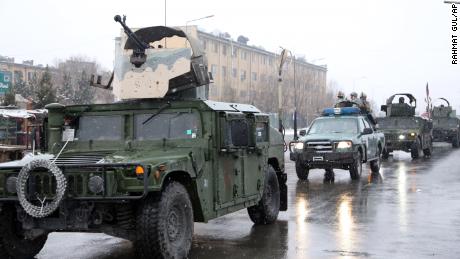 Monday's assault started before daybreak when an attacker detonated his suicide vest at the entrance of the military base, near the Marshal Fahim Military Academy in the west of Kabul, Dawlat Waziri, spokesman for the Ministry of Defense told CNN.The assault dragged on for five hours during which another suicide bomber detonated his explosive vest. Another two were killed by the Afghan National Army and one was captured, Waziri said.Eleven Afghan army personnel were killed and 16 were wounded in the attack, he said. 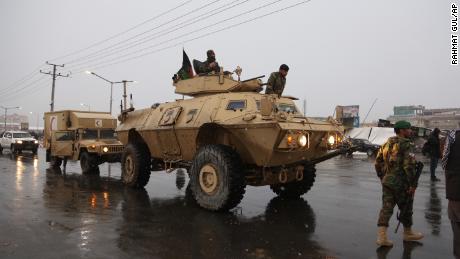 Although ISIS claimed responsibility for the attack through its media arm, the Amaq News Agency, itdidn't provide any evidence to support the claim. The site reported "an immersive attack by the Islamic State fighters targeted the Military Academy in Kabul city."The Marshal Fahim National Defense University shares the site with two other military facilities, including a NATO base that houses instructors for the academy, according to spokesman Shah Hussain Murtazawi. The military complex, which is located in the 5th police district of Kabul, is near the site of a suicide bombing in October 2017.Carnage in Kabul adds to US challenges in Afghanistan

Week of bloodshed challenges Kabul, US

The attack comes just two days after an attacker driving an ambulance packed with explosives killed more than 100 in the Afghan capital.The Taliban claimed responsibility for the bombing, which took place on Saturday when an explosion-packed ambulance drove through a checkpoint. More than 200 people were left injured, including 30 police officers, according to Kabul police chief Basir Mojahid said."I felt the earth shaking first for a few seconds then the explosion," 48-year-old Kamaludin, who witnessed the ambulance blast, told CNN. "I was like 50 meters away. I fell to the ground … (then) iI saw carnage. I saw a lot of blood, body parts."The devastating attack took place exactly a week after militants stormed a Kabul hotel in a 12-hour standoff. In that incident, which was claimed by the Taliban, Afghan authorities say the attackers killed at least 18 people, including 12 foreigners, before security forces broke through. At least four assailants also were killed.Some Afghan authorities blamed the Pakistan-based Haqqani network for the attack, who are aligned with the Taliban.Just days after the hotel siege ended, ISIS militants attacked the offices of British aid agency Save the Children in the eastern Afghan city of Jalalabad on Wednesday, killing at least four people and injuring dozens in a 10-hour battle, according to local authorities. All five attackers were killed.Day laborer Sayed Hassan told CNN he feared for his family and children, and wanted better security in Kabul. "I leave home in the mornings and I am not sure if I will not get killed," he said.The repeated attacks and growing atmosphere of insecurity highlights the problems faced by the United States military presence in Afghanistan, reinforced with thousands of new troops by the Trump administration.Despite the US presence in the country since 2001, the Taliban have only grown more powerful in recent years. As of October 2017, the Taliban and other insurgents controlled 14% of the country's districts and contested another 30%, according to US military data released to CNN. Afghanistan's national government appears weak and divided in the face of the assault, which has cost the lives of at least 7,000 Afghan soldiers in the past year.Monday had been set aside as a public day of mourning for the victims of Saturday's ambulance blast, while Tuesday was intended as a national day of prayer.But, instead, the new attack has only highlighted what CNN's Paton Walsh wrote in the wake of the Kabul Hotel attack which started the week of bloodshed."Nowhere is really safe now."This story has been updated to reflect the latest data from the US military.

CNN's Karen Smith and Samantha Beech contributed to this report.