Gui Minhai, who wrote and published numerous titles critical of the Communist leadership, was traveling to Beijing to be examined by a Swedish doctor at the embassy when he was taken, his daughter Angela told Radio Sweden on Monday.Gui had been diagnosed with a progressive neurodegenerative disease known as ALS, his daughter said. It's the second time in just over two years that Gui has been allegedly seized by Chinese agents. He first disappeared in late 2015 from his holiday home in Thailand. 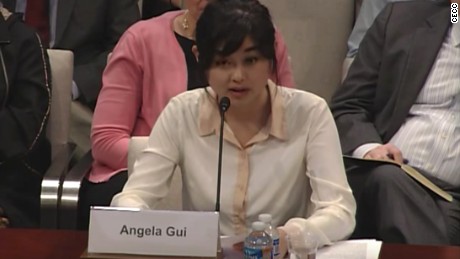 "He was escorted on this train journey on Saturday by two diplomats and they were on the train for about five hours," Angela Gui said from Cambridge, England, where she is studying."At one of the stops before Beijing, there were about 10 men in plainclothes that came in, and said they were from the police — and just grabbed him and took him away. After that, I have not heard anything."Sweden's consul general in Hong Kong, where Gui and his publishing house were based, said her government was "fully aware" of the incident on the train."We are in constant communication with Chinese officials and we are treating the case with the utmost seriousness," Helena Storm told CNN on Tuesday.A spokeswoman for China's foreign ministry repeatedly declined to provide information on Gui's case, or be drawn on the issue of his citizenship during a regular press briefing Tuesday."All foreigners in China, including diplomats in foreign embassies and consulates, must not violate international law or Chinese laws," said Hua Chunying. "That's common sense and a basic principle."Chinese police authorities have yet to respond to CNN's request for comment. 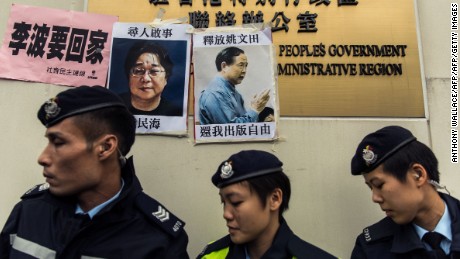 Gui, 53, was one of five Hong Kong-based booksellers who disappeared in mysterious circumstances in late 2015 before resurfacing in Chinese police custody. They were all involved in publishing political gossip about China's Communist leaders, including President Xi Jinping.Amid intense speculation of his kidnapping by Chinese government agents, a tearful Gui was paraded on state broadcaster CCTV in January 2016. During the appearance, he said he had returned to China from Thailand voluntarily to clear his conscience over a fatal drunk-driving accident more than a decade earlier.During the broadcast, Gui, who was born in eastern China but became a naturalized Swedish citizen in the early 1990s, asked the Stockholm government to leave him alone and insisted: "Though I hold a Swedish passport, I still feel I am Chinese."His televised confession later became a symbol of what human rights advocates say is the Beijing government's increasingly repressive measures to clampdown on dissent — including overseas abductions, televised confessions, and ignoring counselor rights even for those with foreign citizenship. Since Xi came to power in late 2012, China has rounded up hundreds of activists and lawyers nationwide in what many analysts call the worst crackdown on human rights advocates in decades.Chinese authorities have said Gui fled the country during a suspended sentence over the drunk-driving accident. State media also reported he was under investigation for "operating business illegally."Gui was released from custody last October but was put in an apartment in his hometown of Ningbo, near Shanghai, and has remained under tight police surveillance, according to his daughter."I'm not sure why this happened," she said Monday. "It was quite clear when he was under this form of house arrest in this flat in Ningbo that they weren't going to let him leave. And it may just be an escalated way of making sure that he doesn't.""It's quite clear this he's been abducted again, that he's held somewhere in a secret location," she added. "Especially given his health status, I think that's very worrying."Speaking to CNN Tuesday, Hong Kong-based senior China researcher for Human Rights Watch Maya Wang said the case of Gui Minhai demonstrated the Chinese government's "deep contempt for the law.""First, they kidnapped a foreign national from abroad, then they 'released' him into custody, and finally, they seized this 'free' man while he is being accompanied by foreign diplomats," said Wang.