North, S Korea to march together at Olympics

The nations have also agreed to form a joint North and South Korean women's ice hockey team for the Games in Pyeongchang, which begin early next month, South Korea's unification ministry said. The unification ministry announced a range of joint activities between the countries for the Games, following talks Wednesday at the demilitarized zone (DMZ). North and South Korean skiers will train together at a resort in North Korea before the Olympics start, and performers from the two countries will also hold a joint cultural event at Mount Kumgang.North Korea will also send around 230 supporters to cheer on its athletes. A smaller delegation of North Korean athletes and supporters will attend the Paralympics, the ministry said. 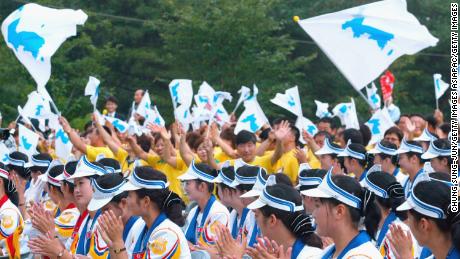 The Korean Unification Flag features a blue silhouette of the peninsula and outlying islands. The two countries have marched under the flag before, in rare shows of unity, first at the 1991 World Table Tennis Championships, and at a number of sporting events since. It was most recently used at the 2006 Winter Games in Turin, Italy. The International Olympics Committee (IOC) would need to approve the countries' agreements, and those that affect competition, such as the joint hockey team, could be more complicated than the ceremonial proposals. The committee said Wednesday it had received a number of "interesting proposals" that it would discuss with delegates from both countries in Switzerland on Saturday. "We are sure that the two Korean delegations will present their ideas and proposals at the meeting on Saturday in Lausanne. This will then enable the IOC to carefully evaluate the consequences and the potential impact on the Olympic Games and the Olympic competitions," it said in a statement.

Wednesday's announcement is the latest breakthrough since talks began between the two Koreas earlier this month, after years of broken communications. While the two sides have earned praise for ratcheting down military tensions in recent weeks, some of Seoul's allies voiced concern Wednesday that Pyongyang may be using the talks to buy time to pursue its weapons program.The US military has moved more firepower to the region and Secretary of State Rex Tillerson warned of complacency at a Tuesday summit in Vancouver where the top diplomats from the United States, Japan, Canada and the United Kingdom were in town to discuss North Korea.Japanese Foreign Minister Taro Kono called on the international community to be clear-eyed about North Korea's motivations for participating in the talks, which have been hailed by some as the most significant thaw in ties in years."I believe that North Korea wants to buy some time to continue their nuclear and missile programs," Kono said at the meeting. "It's not the time to ease pressure towards North Korea."China denounced the Vancouver talks, and the United Nations Command, under whose framework they are being held, as demonstrating "Cold War mentality.""(Such thinking) will only lead to split in the international community and harm the joint efforts that could properly solve the nuclear issue on Korea peninsula," Foreign Ministry spokesman Lu Kang said Wednesday.

It remains to be seen how much progress achieved before the Olympics will be retained after the games are over, or if tensions will again worsen. John Park, director of the Korea Working Group at the Harvard Kennedy School, warned against viewing the talks as a major breakthrough. "Both Koreas are primarily utilizing the talks for a limited objective — arranging the participation of a North Korean delegation in the Pyeongchang Winter Olympics," Park said.South Korea's Foreign Minister Kang Kyung-wha said the talks were a "significant step" but acknowledged the serious challenges ahead: "Despite these overtures to improve relations with the South, North Korea has yet to show any intention to fulfill its international obligations regarding denuclearization."North Korea has remained adamant throughout this month's thaw in relations with South Korea that its nuclear bombs and ballistic missiles are here to stay.Joint US-South Korea military drills — which always infuriate Pyongyang and raise tensions on the peninsula — have been suspended for the duration of the upcoming Olympics as a show of good faith, but they are likely resume following the competition.

Who is George Weah?