Monday's exercise came as a North Korean delegation toured potential concert venues in Seoul as part of preparations for the Winter Games to be held in South Korea next month.Despite the appearance of warmer Korean ties, Japanese Prime Minister Shinzo Abe warned his countrymen to remain vigilant, describing the threat of North Korea's nuclear and missile development as "unprecedented" and "imminent.""It is no exaggeration that the security situation surrounding Japan is the toughest since World War Two. We must have North Korea give up its nuclear and missile development completely in a verifiable and irreversible way," said Abe.In September last year, North Korea test-fired an intercontinental ballistic missile (ICBM) over the northern Japanese island of Hokkaido. It was one of two North Korean missiles to launch over Japan that year, leaving the country greatly alarmed and bolstering Abe's calls to scrap Japan's post-WWII pacifist constitution. 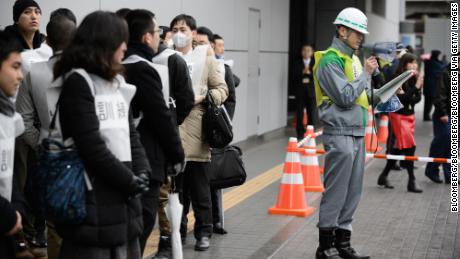 As with Japan's numerous earthquake and tsunami drills, Monday's exercise saw volunteers respond to instructions sent by text message and loudspeaker informing them to move quickly and orderly to a series of predetermined, mostly underground, locations. It took just 10 minutes from start to finish.The drill, which was partially staged in an amusement park, was one of dozens held across Japan in recent months, with the majority taking place in smaller communities, due to the logistical challenges of staging a missile attack simulation in a large city. Around 35 million people live in the greater Tokyo area, which has PAC-3 Patriot missile defense systems in place. But those systems have a mixed track record, even under test conditions. Toshiko Matsumoto, a Tokyo resident who participated in the drill, told CNN that given last year's string of North Korean missile launches, he wanted to "be ready if a missile comes."Japan's first missile drill was held last March in Oga, a small fishing and agricultural community on the Japanese island of Hokkaido. But there was something of an unplanned drill earlier this month, too, when public broadcaster NHK sent out an erroneous alert saying North Korea had launched a ballistic missile.The message, received by phone users with the NHK app installed on their devices, read: "NHK news alert. North Korea likely to have launched missile. The government J-alert: evacuate inside the building or underground. "The broadcaster apologized for the error, adding "the news alert sent earlier about NK missile was a mistake. No government J-alert was issued." The mistake was corrected within minutes.That alert came days after the US state of Hawaii accidentally sent a "ballistic missile threat" alarm to all citizens. It was blamed on an employee who pushed the "wrong button." 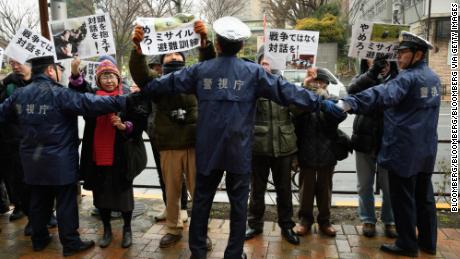 Retired Tokyo resident Miyako Mirtamura said that it was impossible to "know what North Korea has on its mind." "It is very frightening to think about what would happen if Tokyo was severely damaged," she said.The Japanese government has said the drills are necessary to prepare citizens for a North Korean attack. "We know there are various opinions about this. But the reality is that missiles have been flying over to Japan," said Japanese Cabinet Office Counselor Hiroyuki Suenaga after the drill."The government believes it is important for people to understand what kind of actions the public must take in order to provide the safety and security to Japanese people," said Suenaga.Near the site of Monday's exercise, two small but loud groups of anti-war protesters held signs and passed out leaflets, accusing the Japanese government of politicizing the North Korean threat. Abe's ruling party, the conservative LDP, is leading a controversial push to revise Japan's pacifist postwar constitution. Critics fear the proposed changes will give Japan's military more responsibility beyond simple self-defense. Japan has also announced massive new purchases of military equipment, primarily from the United States.Speaking to CNN, Protester Tomoko Ito described the drills as "a practice for war." "The government doesn't care what we think. They try to mentally prepare us all for this. A war can start from this kind of small thing. This might look small, but it's big and it's the start of a war," said Ito.

Who is George Weah?