A final decision to release over a million tons of radioactive water from the crippled Fukushima plant should be made “within this year,” as its operator is running out of land to store the waste, Japan’s nuclear regulator said.

Tokyo Electric Power Company (TEPCO), the operator of the Fukushima plant, is short on time to decide what to do with some one million tons of radioactive water it has been storing in hundreds of tanks at the plant, Japan’s Nuclear Regulation Authority [NRA] Chairman Toyoshi Fuketa told the mayor of Naraha, a town near the stricken facility, on Thursday.

“We will face a new challenge if a decision [about the release] is not made within this year,” Fuketa said, as reported by Japan Today.

Toxic water at the plant is being diluted through a processing system that can remove 62 types of radioactive material except tritium, which, the NRA chairman claimed, is totally safe to the environment.

“It is scientifically clear that there will be no impact on marine products or to the environment,” Fuketa assured the mayor.

TEPCO has been constantly adding new water tanks to store the water it uses to keep the melted fuel rods cool, as well as the groundwater contaminated in the process. According to Japan’s nuclear watchdog, there are currently 650 tanks at the facility that store about one million tons of water. As of July last year there were 580 tanks and 770,000 tons of liquid.

The increase means TEPCO and the Japanese government have very little time before the capacity to hold water at the plant is overstretched. Fuketa estimates it may take an additional “two or three years” to prepare for the dumping after the decision is made.

“(TEPCO) has been building new tanks, but it will eventually run out of land,” an unnamed NRA official said, according to The Japan Times.

While both the NRA and TEPCO claim the tritium-contaminated water does not pose any risk to maritime life, local fishermen’s unions have been staunchly opposing the pending release, arguing the release of the radioactive water would stir speculation and make their work impossible.

Last July, TEPCO announced the decision was “already made” to release the tritium-contaminated water, with the company’s chairman Takashi Kawamura saying TEPCO “could have decided much earlier.” However, after facing a backlash from local fishermen, the effort has stalled without ever going ahead. 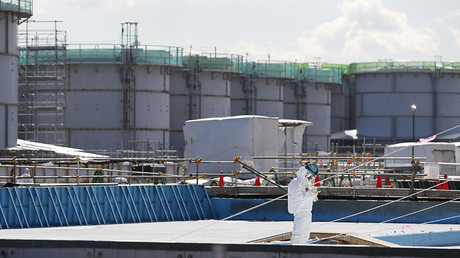 Apart from the potential massive discharge of radioactive water into the sea, the facility is slowly endangering the environment with regular leaks and groundwater contamination. Last September, TEPCO admitted that six of its indicators malfunctioned and were showing substantially higher groundwater levels than in reality. As a result, the company said the contaminated water might have been leaking into the soil for five months before it discovered the problem.

In March 2011, a massive tsunami triggered by a 9.0-magnitude earthquake caused a fuel meltdown in three of the plant’s reactors, which led to massive release of radiation. The Fukushima disaster is regarded as the most serious nuclear catastrophe since the Chernobyl nuclear accident in 1986.

Lindsey Graham To Americans: Your Country Belongs to the World

Limbaugh: Reaction to Trump ‘Shithole’ Remarks ‘Faux Rage,’ ‘Made Up’ for Cameras, Microphones