A MH-60 Jayhawk helicopter crew with the US Coast Guard in San Diego was deployed Tuesday to Carpinteria after first responders in Santa Barbara County couldn't get through the muddy floodwaters surrounding the house. Weeks after wildfires tore through the region, heavy rains sent mud rolling down the barren hillsides in the county. At least 15 people have died in the storm. "The first floor of their house was about three, four feet of mud so they were having to wade through," rescuer Erin Custer told CNN affiliate KSWB. A couple, their three children and two dogs were taken to a nearby staging area, the Coast Guard said. 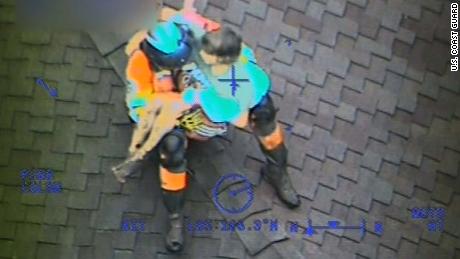 Video footage from the helicopter shows rescuers pulling the family and their dogs onto the roof of the house before lifting them up in a rescue basket. Custer said they couldn't put the basket down in the mud because they "didn't know what was underneath the mud."Later Tuesday, that crew and another Jayhawk team helped rescue more than 20 evacuees and pets from a shelter also affected by the storm, officials said.

600 Men Show Up to Mentor Boys at Texas School