Ankara is set to embrace a “bold and risky” foreign policy next year, Turkish President Recep Erdogan has promised in his New Year's message. He said Turkey will play an active role in the Middle East and on the Jerusalem issue.

“Turkey will not be able to secure its future without resolving problems in its region,” Erdogan said in his message published on December 31. “This leads us to pursue a more active, bold, and if necessary, more risky foreign policy,” he added, as cited by Hurriyet newspaper.

The Turkish president said Ankara cannot hold negotiations with other actors on the international arena and play a particularly active role in the Middle East “without being [active] in the field.” He then listed Turkey’s recent actions that allowed it to take on a more prominent role among regional powers.

“To this end, we have taken significant steps over the last year by launching an operation into Idlib [in Syria] and by nixing the regional government’s independence bid in Iraq,” he said. In autumn, Turkey launched a campaign in the northwest Syrian province of Idlib aimed at enforcing the de-escalation zone in the area.

The proposal to establish four de-escalation zones in Syria, championed by Russia, was finalized in September at the latest round of Syria peace talks in Kazakhstan's capital, Astana, with Idlib becoming the fourth safe zone to be established under the deal. In late October, Erdogan said Turkish operations in Idlib “were largely completed.”

In a separate development, Turkey exerted pressure on the Kurdish regional authorities in Iraq following an independence referendum held by the Kurds in September. Erdogan threatened the Kurds with sanctions, warning, that they would “not be able to find food” if Ankara decided to halt the flow of trucks and oil into the region over the independence vote. 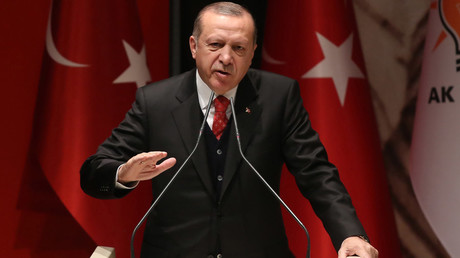 Erdogan also touched on the Jerusalem issue, which, he said, “turned out to be a test for us and our region, as well as for all Muslims and oppressed nations.” Turkey has been one of the most vocal critics of US President Donald Trump’s decision to recognize Jerusalem as the Israeli capital. “Apart from Israel, no state has supported the step taken by the United States. To the contrary, it led to a favourable development of the recognition of Jerusalem as the capital of Palestine,” the Turkish president said in his New Year's message.

On December 13, Turkey hosted an emergency summit of the Organization of the Islamic Conference (OIC) in Istanbul which strongly condemned Washington’s recognition of the Holy City as the Israeli capital. Earlier, Erdogan slammed Arab countries for what he called a weak response to the US move, chastising them of being afraid of Washington.

Erdogan also called Trump’s decision a “major catastrophe,” while warning that Muslims may lose Mecca and other holy sites if the US decision isn’t reversed. Ankara also took the issue to the UN General Assembly (UNGA) after a UN Security Council resolution on rescinding Trump’s Jerusalem decision was vetoed by the US.

In the UNGA vote, 128 countries denounced the US decision in a move that was hailed by Erdogan on Twitter.

Erdogan said Turkey will face “very important developments” both inside and outside the country throughout 2018, and that he would “work day and night” to be prepared for any challenges.