Israel’s government has approved an agreement with the EU that includes a provision excluding funding for settlements, seemingly consenting to the EU’s boycott of settlements.

The agreement centers on Israel’s part in the EU’s ENI Cross-Border Cooperation in the Mediterranean (CBC Med) program, which provides funds for projects for non-EU countries in the Mediterranean area, such as Israel, Egypt and Jordan, Haaretz reports. The projects are largely focused on promoting development, education, technology and environmental sustainability.

As per EU policy, the ENI CBC Med agreement contains a provision which excludes areas outside Israel’s 1967 borders from receiving grants. This means Israeli settlements inside the West Bank, East Jerusalem and the Golan Heights (which were occupied by Israel in the conflict) cannot receive funding under the program.

Israeli settlements inside Palestinian territories are considered both an impediment to the peace process between Israelis and Palestinians, and to be in violation of a number of UN resolutions and the Fourth Geneva Convention.

Israel’s Culture and Sport Minister, Miri Regev, voiced her objections to the agreement to the cabinet secretary earlier in the month. She fought against the deal at the cabinet meeting, the Jewish Press reports, but no other minister agreed to second her motion to delay the vote pending further debate.

The deal was given final approval by the government Sunday, after Prime Minister Benjamin Netanyahu signed off on the measure last week. It’s also been approved by the Justice Ministry and Foreign Ministry, Haaretz reports. The foreign ministry is said to have led the charge for Israel to be part of the program.

The agreement is at odds with the Israeli government’s stance on settlements, which it continues to develop within the occupied territories in disregard of the EU and others’ condemnation. Netanyahu is also a fierce opponent to the international Boycott Divestment and Sanctions (BDS) movement which calls for boycotts and sanctions against Israel. 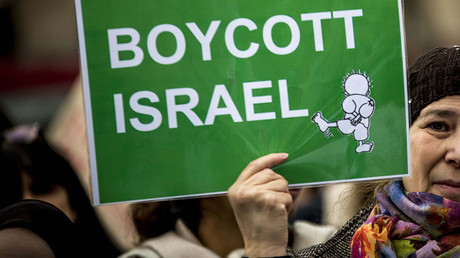 "My fundamental position is that the Israeli government should reject agreements from the outset that require us on a de facto basis to boycott portions of the homeland or populations living in the Golan Heights, Jerusalem or Judea and Samaria [the West Bank] other than with very limited exceptions,” Regev wrote in her letter.

“I do not see the justification to compromise and with one hand sign the agreement while with our other demanding that the world give de facto recognition to our right to a united Jerusalem and even to move embassies to Israel's capital," she added.

Aside from the settlement matter, Regev’s letter to Cabinet Secretary Tzachi Braverman also took issue with the text of the agreement referring to the Palestinian Authority “as if it were a neighboring country.”

It is “not acceptable to me,” she said.

The far-right Regev managed to halt a similar agreement with the EU last year. A Creative Europe culture and media program contained a similar provision excluding settlements, and, although Netanyahu had given consent, Regev stopped it from going ahead. Earlier this month, Regev succeeded in forcing the NBA remove a reference to Palestine as being “occupied territory.”