The US understands it’s challenging to ask North Korea to abandon its nuclear weapons program, but without a long-term solution, within five to ten years Pyongyang will acquire a minimum credible nuclear deterrence, said political scientist Joseph Cheng.

South Korea and the US are conducting their largest joint aerial exercises called Vigilant Ace which will run from December 4 to 8, according to officials in Seoul.

The exercises come as Washington indicates war with North Korea is becoming increasingly likely while South Korea says they are aimed at improving the allies' wartime capabilities.

Meanwhile, US Republican Senator Lindsey Graham said on Sunday the US is "getting close to military conflict because North Korea is marching toward marrying up the technology of an ICBM with a nuclear weapon on top that can not only get to America but deliver the weapon. We’re running out of time.”

Hong Kong political scientist Joseph Cheng says the recent developments indicate the parties to the conflict are unwilling to negotiate.

RT asked the expert whether these exercises are a sensible response to the current situation on the Korean Peninsula.

Joseph Cheng: This is certainly not sensible. This is not going to be very effective. Both the US and South Korea feel that they had to respond to rather significant missile tests on the part of Pyongyang a while ago. But this means that the vicious circle has been maintained and even exacerbated. It also clearly shows that both the US and South Korea are not ready to accept the suggestion on the part of China and Russia, namely to stop nuclear missile tests on the part of North Korea and missile and military exercises on the part of the US in South Korea to generate a better atmosphere for negotiations. At the moment, it seems that the situation remains tense and we can find no breakthrough in the foreseeable future.

RT: How dangerous is the situation at the moment?

JC: It is largely rhetoric, as we know because the US is not ready to exercise the military option because both Russia and China are strongly against it. And South Korea is not ready to support any military option. In this scenario, you certainly can see that the people in Seoul, the people in South Korea, remain quite calm. The stock market has not been affected, and you see no panic in South Korea as well. But the atmosphere is certainly deteriorating, and there is no attempt to initiate negotiations, and in that kind of atmosphere, further missile tests on the part of North Korea are almost inevitable. And one or two nuclear tests on the part of Pyongyang are also quite likely.

RT: Do the exercises indicate that the US may really be expecting war to break out? 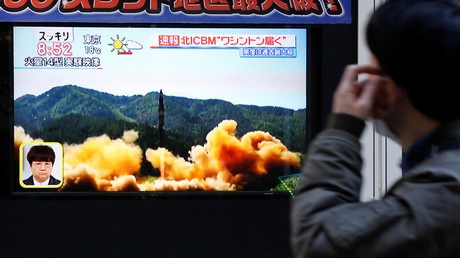 RT: Should China be taking a tougher stance on North Korea?

JC: I believe that China is willing to do more if there are also significant initiatives on the part of the Donald Trump’s administration. It will be difficult to expect Beijing to do more while the US refuses to do anything to bring about peaceful negotiations. China is certainly unwilling to exert pressure on North Korea to … kill its economy because any serious economic difficulties in North Korea may generate flows of refugees to China across the border in the North-East part of China.

RT: Is there a solution to the crisis? Is it now a choice for Washington between conflict and accepting a nuclear-armed North Korea?

JC: On a rational basis, I think the US probably understands it is now extremely difficult to ask North Korea to abandon its nuclear weapons program. So, the only way out is to negotiate…But the US also understands it needs a long-term and ultimate solution, otherwise, in five to ten years North Korea will probably acquire a minimum credible nuclear deterrence.

RT: Are you hopeful a solution can be found?

JC: We still count on the wisdom of the parties concerned, and we still assume that they remain rational. And on the last point, it certainly means that at the moment all parties do not want a military conflict in the region.