Brazilian side Gremio, for the first time in 22 years, stand at the summit of South American club football after beating Argentina's Lanus to claim the Copa Libertadores title.Follow @cnnsportMore than 30,000 fans packed into Gremio's stadium to watch their side in the final of South America's most prestigious club competition even though the match wasn't taking place there — it was being played more than 1,000 kilometers away in Buenos Aires.The first leg had taken place in Brazil a week earlier, with Gremio emerging with a narrow 1-0 win to take into the second leg in Lanus, a district to the south of the Argentine capital.READ: Lionel Messi's buyout clause set at $835 millionREAD: Take a tour of the 2018 Russia World Cup stadiumsWatching on a big screen in the Arena do Gremio, in the heart of Porto Alegre, and on others screens dotted around the city, fans celebrated as midfielders Fernandinho and Luan gave the visitors a seemingly unassailable 3-0 aggregate lead before half time.In Argentina, the mood of the home fans was decidedly different. A night which had started with fireworks and hope soon descended into tears as Lanus realized their first ever Copa Libertadores final would not yield a trophy.Veteran striker Jose Sand's penalty 20 minutes from time gave the hosts some forlorn hope, before Gremio were reduced to 10 men as Ramiro saw red for two yellow cards inside a minute.Lanus huffed and puffed, but the numerical advantage on the pitch counted for little on a night Gremio were far superior in every capacity.Manager Renato Gaucho, a former player and already a club legend, becomes the first Brazilian to win the Copa Libertadores as a player and coach — both titles coming with Gremio.It is the third time the 'Imortal Tricolor' have been crowned champions of South America, previously winning in 1983 and 1995, and the victory sees them qualify for next week's Club World Cup in the United Arab Emirates, a seven team competition involving all of 2017's continental club champions. 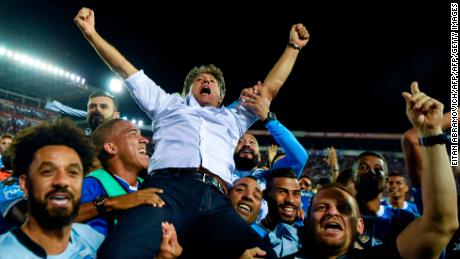 Potential semifinal opponents are reigning champions Real Madrid, although the coach has already given his players the next three days to "celebrate."There is the feeling, however, that celebrations in Porto Alegre will last considerably longer.In his post match press conference, Renato asked for forgiveness from the mayor of Porto Alegre, Nelson Marchezan Junior. 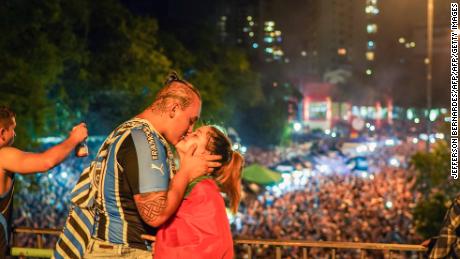 Visit CNN.com/sport for more news and features"Sorry, Mr. Mayor, you are an authority," he told reporters joyously. "But I, Renato Portaluppi, decree a holiday tomorrow in Porto Alegre!"