Ships and aircraft still are scouring the South Atlantic for the ARA San Juan and its 44 crew members, which disappeared November 15 a few hundred kilometers off Argentina's coast.The Argentine navy had previously saidthe vessel's captain reported a short-circuit in the vessel's battery system shortly before the last known contact. On Tuesday, the navy released new details, including the times and contents of the vessel's communications with a command base.The new timeline, according to Argentine navy spokesman Enrique Balbi:November 15, 12:30 a.m.: The sub's captain calls his land-based commander by satellite phone, saying that seawater has entered the vessel's "snorkel," a tube that reaches the surface to refresh the vessel's air and recharge the batteries. He says the water caused a short-circuit in the battery system in the vessel's bow and the beginnings of a fire, or smoke. The smoke was put out and the short-circuited system was isolated.The captain indicates that the battery- and diesel-powered sub would continue traveling with its stern batteries.6 a.m.: The captain types the same message and relays it to base electronically, as is protocol following a phone conversation.7:30 a.m.: The captain calls base again, this time to say that the vessel is traveling, submerged, as planned, without any personnel problems.10:31 a.m.: A sound consistent with an explosion is detected in the ocean, near the sub's last known location.The Argentine navy says it didn't know about the explosion-like sound until last week, when the United States and an international organization said they had uncovered the acoustic data.There was no evidence of any attack and no information on the cause of the noise, Balbi said last week.The San Juan had been traveling from a base in Argentina's far southern Tierra del Fuego archipelago to its home base in Mar del Plata, on country's northern coast.The sub was a few hundred kilometers off the coast when it disappeared November 15, roughly halfway between its departure point and destination.Crews from a number of nations are searching by air and sea for the San Juan in an area of roughly 40,000 square kilometers, Balbi said Tuesday.The time to find the crew with a viable air supply may have passed. 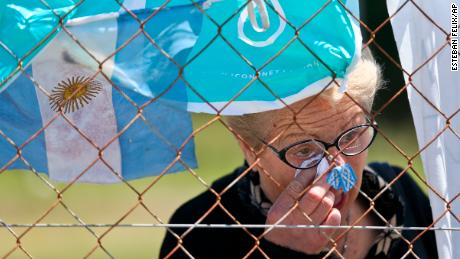 The San Juan, if intact after an initial emergency, would have enough air to last seven to 10 days, if it remained fully immersed during that time, experts say. If the submarine surfaced or raised its snorkel to refresh its air, the crew could have bought more time.The 10-day mark was reached Saturday. Searchers don't know where the sub is, and no contact was made with the vessel after the morning of November 15, Balbi has said."It's a difficult situation, but we will keep on searching," Balbi said Tuesday.

The navy released the new timeline a day after Argentine TV news outlet A24 published what it said was the typed communication from the sub's captain to base on the morning the sub vanished.CNN's English translation of the message that A24 broadcast is: "Seawater leaked in through the ventilation system into battery system No. 3, causing a short circuit and the early stages of a fire where the batteries were. The batteries on the external bow are out of service. We are currently submerging with a divided circuit. Nothing new to report regarding personnel. Will keep you informed."Balbi's account of the sub's 6 a.m. message roughly matches the document that A24 broadcast Monday. But Balbi said he couldn't release a printout of the message, saying it was confidential.He called A24's document a "leak," and said the navy was investigating the leak.

Water in the snorkel

Balbi said it is normal that some water — from waves, for example — would enter the sub's snorkel while it takes in air above the surface. A pump system usually can expel excess water.But, "if more water goes in than the pump can handle, that could be a problem," Balbi said.The sub would have had the capacity to travel with just one set of batteries, Balbi said, but would have done so at a slower speed, to reduce the number of times it would need to snorkel.